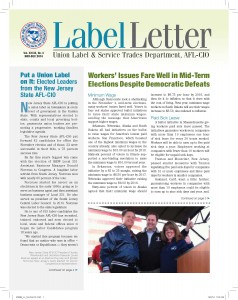 The Trans Pacific Partnership (TPP) threatens more than American jobs, its full impact could undermine the quality of life for all Americans.

This free trade agreement, if signed by the US, will undermine food safety, Wall Street regulation, Buy American requirements for government spending, and give corporations equal rights with the sovereignty of nations under the emerging “investor state” doctrine. TPP is comprised of 29 chapters covering the environment, food and drug safety, intellectual property, financial regulation, telecommunications and much more. Yet, details are sketchy, dependent upon Wikileaks and whistleblowers. If any national laws among any of the participating nations is challenged by one or more corporations under the investor state doctrine, corporate interests could prevail. No wonder this massive deal is a big secret, kept from the hundreds of millions of people it will affect.

Which countries are negotiating this Free Trade Agreement? Australia, Brunei, Canada, Chile, Japan, Malaysia, Mexico, New Zealand, Peru, Singapore, and Vietnam are at the table and China is reputed to be interested in joining them.

Perhaps it is a mistake to say that the countries are negotiating. The negotiations are in secret, open only to corporations, their lobbyists and agents, who are officially called “trade advisors.”‘

Civic groups, unions, common citizens are excluded, as are members of Congress.

We only know what they tell us. And we are only told that a lot of jobs and good fortune will flow from this massive agreement. Just like NAFTA.

In his State of the Union address, President Obama threw in one subtle but major demand: a renewed request for Fast Track Authority on the Trans Pacific Partnership. In other words, a demand for an up or down vote with no amendments admissible in Congress, which one recalls is a legislative body of some prominence and power. Congress can and should refuse to restore fast track authority which officially expired in 1997.

President Obama could have opened up about the TPP and told the American public what was at stake. Vague assurances and vapid promises from the White House or the US Trade Representative are unpersuasive. If corporations are going to be elevated to the status of sovereign nations workers and their unions need to be on an equal footing with corporations.

If the Obama administration were really concerned about the middle class, American jobs and American manufacturing, it would look elsewhere than race-to-the-bottom trade agreements.

Here’s an idea for the administration. Resurrect the Employee Free Choice Act to which it gave lip service some years back. A fight to make unionizing fairer for workers might give some relevance to an administration entering lame duck status ahead of schedule.