On September 7, 2016, the AFL-CIO officially endorsed the boycott of the Crowne Plaza Hotel LAX per the request of UNITE HERE President, D. Taylor.

The boycott endorsements adopted by the AFL-CIO Executive Council will remain in effect for up to one year, unless UNITE HERE requests an earlier termination of the listing. At the end of the first year, the union may request for the hotel to continue to be included on the list for another 12 months. 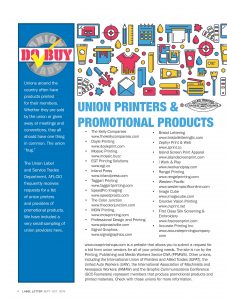 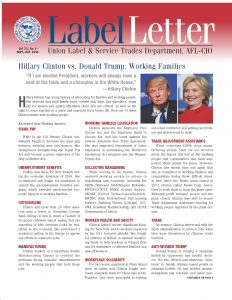 Labor Day has great meaning to many. Yes, a three-day weekend filled with family gatherings, last-minute end of summer trips, barbecues and fun, but it means so much more to those of us in the Labor Movement.

It’s a call to action. For the Union Label Department, it means a renewed effort to encourage our brothers and sisters and all Americans to look for the Union Label on items we purchase and services we seek. It means, we must work to defend our Movement against those who would seek to erase the past and erode the rights our unions gained for us over the years.

We’re already seeing great victories in our immediate past. Workers at Zara Fashion stores voted to form a union, giving 1,000 retail workers a voice at one of the largest fashion retailers in the world. Two hundred workers at the Lipton Tea plant in Virginia just voted to join a UFCW local. The “Fight for $15” campaign is gaining traction nationwide with legislative victories coming fast and furious.

But they are still fighting us. A Pacific Northwest restaurant group has put a “living wage” surcharge in place to turn diners against the living wage law recently passed in that area. The surcharge is a mere one percent – easily added to the restaurants prices with little pain (or notice) to diners. The restaurant group’s use of this tactic forces employees to explain the surcharge to diners, probably uncomfortably.

This is how businesses are fighting back against movements like Fight for $15. Turning the frontline employee or the union into the enemy of the consumer. These aren’t new tactics and we can overcome.

As labor leaders and union members, it’s clear our job is not done. It has only just begun. In our local unions across the country, there are 21st century labor heroes blazing a new path. Let’s take a moment this holiday weekend to remember those heroes that came before us. Or perhaps march side-by-side with our next generation of Labor heroes who may be fighting for safer conditions in our factories, equal pay for women, minimum wage laws, or progress in our work places.

From Labor Day, Monday, September 5, through Sunday September 11, 2016 American labor will observe Union Label Week—the time traditionally set aside for union families and all consumers to make a special effort to support good jobs by looking for union-made goods and union-produced services when they shop.