The United Automobile, Aerospace and Agricultural Implement Workers of America (UAW) is one of the largest and most diverse unions in North America, with members in virtually every sector of the economy.

UAW-represented workplaces range from multinational corporations, small manufacturers and state and local governments to colleges and universities, hospitals and private non-profit organizations.
The UAW has more than 400,000 active members and more than 580,000 retired members in the United States, Canada and Puerto Rico.

There are more than 600 local unions in the UAW. The UAW currently has 1,150 contracts with some 1,600 employers in the United States, Canada and Puerto Rico.

A unique strength of the UAW is the solidarity between its active and retired members. A solid majority of the union’s retirees stay actively involved in the life of their union, participating in retiree chapters and playing a vital role in the UAW’s community action program.

Since its founding in 1935, the UAW has consistently developed innovative partnerships with employers and negotiated industry-leading wages and benefits for its members. ■

Workers and Their Unions Have Plenty to Protest

The body politic is crawling with dissent.

Town meetings with legislators are uproarious with citizens of all political persuasions who are deeply concerned about their healthcare, Medicare and Medicaid. Scientists are marching in defense of unbiased inquiry. Educators are protesting privatization schemes. Environmentalists protest and publicize the threat to our water, our air, our land and the planet at large. Women have and are protesting misogyny, legal restrictions and workplace inequities.

Union members, including those who voted for Donald Trump and Mike Pence and their Republican allies in the Congress, governors’ offices and in state legislatures, have plenty to protest, too.

Bills in the Senate and House, (H.R. 785 and S. 545), originating from determined anti-union legislators, call for a National Right-to-Work Law. The objective is to destroy the ability of unions to protect their members’ interests. President Trump said during the election campaign that he favors right-to-work (for less). Vice President Pence was anti-union as governor of Indiana and hawkish on right to work. Republican-controlled legislatures press for right-to-work (for less) where they haven’t already got it.

A Repeal Davis-Bacon Act bill (H.R 743) is pending in the House. A similar measure is under consideration in the Senate (S. 244). A successful repeal would strip away the prevailing wage provision that enables unionized construction contractors to compete effectively for federal contracts. Voter’s remorse will be the least of the ills suffered if Davis-Bacon repeal passes into law. Good paying jobs with benefits will disappear as non-union contractors jump in with low bids.

What can be done? In-plant, job-site and community education on the issues and importance of union representation is required. The cost of freeloading coworkers should be made plain where right-to-work laws already are in effect and where they might be in the future. The benefit of the prevailing wage rule to working families and their communities should be widely advertised.
Education may forestall some of the negative impact of right wing reactionary attacks on workers’ rights, attacks which will harm workers no matter for whom they voted.

People are looking for value. Union membership provides value to union members, employers and society. The Labor Movement needs to do a better job in convincing America that it provides value. ■ 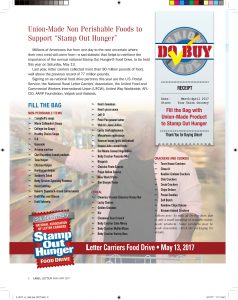 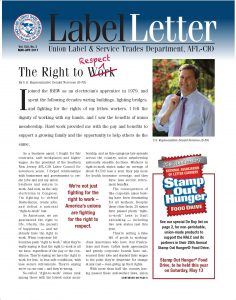