Ross Hyman, a research analyst for the AFL-CIO Center for Strategic Research, shares this info.

Joined by clergy and other community supporters, Hyatt hotel workers gathered outside Hyatt headquarters in Chicago yesterday to announce a boycott of the Hyatt Regency Chicago, the Park Hyatt Chicago and the Hyatt Regency O’Hare hotels. Hyatt workers, members of UNITEHERE!, have been working without a contract for nearly a year as Hyatt management continues in its insistence on cutting employee health care.  Hotel workers are now boycotting 10 Hyatt hotels across the nation.

Gabriel Carasquillo, a server at the Park Hyatt, told the crowd:

I truly believe that my health should not be a point of negotiation.

Hyatt recently marched in temporary workers into the Hyatt Regency from the same temporary agency that Hyatt used after firing all 98 of its housekeepers from its three Boston Hyatt hotels last year.

As reported in the Chicago Breaking Business, “Hyatt Hotels Corp. faced the wrath of religious leaders”:

John Schafer, vice president and managing director for Hyatt Hotels & Resorts, said the hotel chain is preparing in case a strike occurs. Hyatt workers have taken several actions in recent months, including a work stoppage on May 26, 2010, a picket of Hyatt’s annual shareholders meeting on June 9, 2010, a massive demonstration outside the Hyatt Regency Chicago on July 22, 2010, and a strike vote on July 29, 2010. 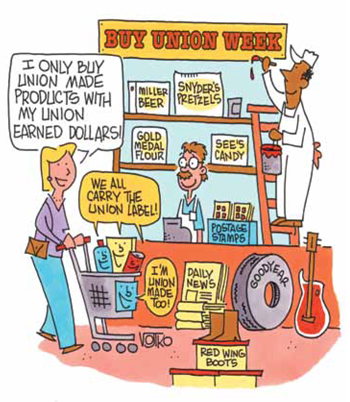 From Labor Day, Monday, September 6, through Sunday September 12, 2010 American labor will observe Union Label Week—the time traditionally set aside for union families and all consumers to make a special effort to support good jobs by looking for union-made goods and union-produced services when they shop.

In these difficult times, when everyone is looking to stretch their paycheck, quality and value take on added importance—and that’s where union products and services beat the competition every time. When you buy union, you’re supporting good jobs in American communities, jobs that provide living wages and benefits, safe working conditions and dignity and respect for work.

So, please join with us on Labor Day and the week that follows to celebrate the skills of union workers and honor the work they do by looking for union-made goods and services.

The Union Label Department has produced a special cartoon graphic to convey the Buy Union message. Please feel free to use it and help us promote the message.

In his keynote address to the convention, Hurt, who has led BCTGM since 1992, praised union members’ solidarity as the key to winning good contracts in this faltering economy:

Our successes at the bargaining table over the last four years were the result of tireless hard work and preparation. Employers have come to respect the proud unity and solidarity of the BCTGM. Employers know that if they take us on they had better be in for the long haul—because we are!

Throughout the convention, which ends tomorrow, delegates discussed and approved resolutions to address the challenges facing the union movement, including anti-worker governments, globalization, toothless labor laws and more.

Write a song about what you like about your union and/or your Union Plus benefits. Here’s your chance to support the labor movement and impress your fellow union members with your musical talent.

You could win $2,000 to help with your recording studio time, a new instrument or whatever you choose!

Union members can submit your union-themed song and/or ringtone today!

Then your fellow union members will vote for their favorite song.