Penny Pritzker’s nomination by President Obama to serve as Secretary of Commerce is a slap in the face to the Labor Movement. Maybe the stinging blow will serve as a wakeup to the Administration’s hypocritical stand on labor issues.

Penny  Pritzker is a billionaire heir to the Pritzker family fortunes and businesses which include the Hyatt Hotels.  Check the AFL-CIO Boycotts on our website.  You will find that UNITE/HERE is conducting a global against them.

Some Republicans are inveighing against Pritzker because of her tax avoidance, offshore assets,  and connection to a major bank failure related to subprime lending. Of course, the Republicans are only too happy to thwart the ambition of Obama’s chief fundraiser.

As for the Labor Movement, when the potential  Secretary of Commerce comes from a corporation with an anti-union bias (she sits on the Pritzker board of directors) danger signs rise up. Why is an Administration that we helped elect two times presenting her nomination? Why is an Administration that promised to keep K Street lobbyists and big bucks donor out of policy-making now breaking its promise?

Maybe with the second election out the way, the Obama Administration can do what it wants. Actually, if you look back , Pritzker was nearly nominated by Obama for the same post in 2008. She pulled her name because of the scandals and a reluctance to come clean about them.

Hyatt Hotels are on the AFL-CIO Boycott List for the gamut of anti-worker, anti-union offenses. At the least, Penny Pritzker, the Obama Administration’s nominee for Secretary of Commerce, ought to disavow her company’s anti-labor policies. The Obama Administration ought to explain why it backed away from its campaign commitments and from the friends who helped it win office.

We can’t let the labor movement die of old age

In October 2011 the AFL-CIO, led by Secretary –Treasurer Liz Shuler, hosted its first Next Up Young Workers Summit. The Minneapolis conference was held to reach out to working people under the age of 35 because the consensus is that the current crop of union members are aging out of the workforce.

Though workers age 16 to 24 represent only 13.5 of the workforce, they account for about 26 percent of all unemployment. More than one-third of young workers are uninsured, much higher than a decade ago. Workers
ages 18-35 constitute 36 percent of the U.S. workforce but account for just a quarter of union membership. Studies indicate that about 19 percent of workers ages 16 to 24 are unemployed.

Referred to as “Generation Debt” by a 2010 Cornell University study “Youth and Unions” author Marlena Fontes points out that almost two-thirds of college students are taking out loans to pay for college and, as of 2005, the
average debt for students who have just graduated is between $17,600 and $23,485. Tuition has
risen two to three times faster than inflation and more students are hiking up debt on credit cards to pay for college and other expenses. Exiting college and moving into the workforce they are already bogged down with debt.

Beyond debt, these younger workers are entering into a post-industrial American economy.

Because of offshoring, the popularity of hiring temporary workers, and the use of freelancers and contractors, young workers find themselves overwhelmingly unemployed or underemployed in every sector.

Union membership does makes a difference. Unionized workers ages 18-29 earn, on average, 12.4 percent more than their non-union counterparts. Since the AFL-CIO launched its initiative, affiliated unions have followed the AFL-CIO’s lead and created young workers’ groups within their own organizations to help build their organizations.

Organizations like the Oregon AFLCIO’s “Young Emerging Labor Leaders” (YELL), AFSCME’s Next Wave, AFGE’s “Young Organizing Unionists for the Next Generation” (YOUNG), CWA’s “Next Generation Network,” and “Baltimore’s Young Trade Unionists” are just a few of the groups that will mold the next generation of union activists.

“We can’t let the labor movement die of old age. It is imperative that we educate, involve, energize and encourage the next generation of trade unionists to rebuild the middle class,” said Union Label Department President Rich Kline. 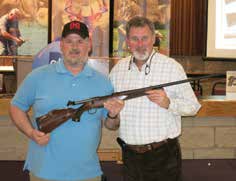 Editor’s note: Our May-June 2013 issue included an article, Ohio AFL-CIO hosts largest Union Sportsmen’s event ever, which stated, “the USA now has over 6 million members, making it larger than the NRA and the next two largest sportsmen’s organizations combined.”  That was incorrect.  While the USA does have the ability to reach more than 6 million estimated union members who hunt, fish and shoot through the AFL-CIO and some of its international affiliates, the USA currently has approximately 60,000 active members.  Collectively, this audience makes up the largest constituency of sportsmen and sportswomen in North America.  The USA strives to recruit and unite those sportsmen and sportswomen and grow the organization in order to join the ranks of long-established organizations in order to have a greater conservation impact.

The Ohio AFL-CIO held the 1st Annual Ohio State Conservation Dinner in March boasting more than 500
attendees, making it the largest Union Sportsmen’s Alliance (USA) event to date.
Forty-five Local Unions, District Councils and Corporate partners contributed a minimum of $1,000 each to support the USA’s Boots on the Ground conservation projects. The funds will go towards the USA’s efforts to unite the union community, to educate future generations of sportsmen and women, conserve wildlife habitat and volunteer for projects that improve access to quality places to hunt, fish and shoot.

“In 2012, the members of the Ohio AFLCIO overwhelmingly adopted a resolution at our Conference to support and get engaged with the Union Sportsmen’s Alliance,” said Ohio AFL-CIO president Tim Burga. “Many union members in Ohio are die-hard sportsmen and women, so we’re proud to support an organization dedicated
to their interests and to preserving the future of our outdoor heritage,” said Burga.

The dinner was held at the UA Plumbers & Pipefitters Local 189 Hall and was the eighth in a series of Union
Sportsmen’s Alliance public events.

The event was planned by a group of 15 volunteers, who spent approximately 250 hours on the event. A Weatherby Ultra Mark V Custom Sporter was auctioned and 63 firearms with a value in excess of $20,000
were given away in raffles and auctions. The event raised $71,000.