Real story of US bank failures: More than 25% of US households can’t afford bank services 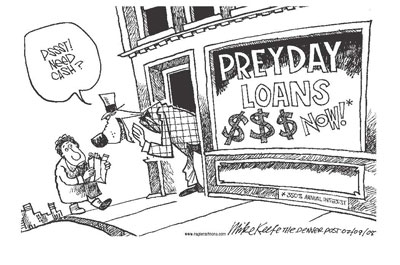 Some 28.3% of U.S. households is either “unbanked” or “underbanked.” That’s an increase of 821,000 since the same survey in 2009. This is the real story of bank “failures” in the U.S. in recent years. Consumers have been let down by a banking system that has abandoned retail service: ordinary checking and savings accounts, check cashing, currency services, according to the biannual survey by the Federal Deposit Insurance Corporation.

The majority of respondents said they believe they did not have enough money or that they do not need or want an account. Three in 10 households nationally do not have a savings account. One in 10 do not have a checking account. One in four households used so-called “alternative financial services,” also known as payday check cashing or payday loan businesses over the year. The survey, conducted in partnership with the U.S. Census Bureau, reflects a general withdrawal of America’s big banks from what most consumers understand to be traditional banking services. Instead, the big banks have added substantial charges for servicing accounts and processing transactions. The American Bankers Association claims that it costs banks up to $300 a year to service an ordinary checking account. “There has to be a recognition that there are costs to providing accounts and those costs have to be covered,” according to an official of the Association quoted in the Washington Post.

The loss of banking services hits hardest in middle and low-income communities. In the past five years, banks have closed dozens of branches in neighborhoods with median household incomes of $25,000 or less while shifting those resources to areas where the median income exceeds $100,000.

Banks also claim that they need income streams to offset what they lost when federal authorities imposed a cap on debit card swipe fees.

Changes in banking laws 10 years ago resulted in scores of mergers and consolidations, with big banks gobbling up the smaller and huge chains to the extent that, today, four of the largest banks in the nation control more than half of all bank assets. Furthermore, large banks have turned to highly profitable corporate banking and speculation, virtually abandoning retail banking services.

Implications of the Gig Economy–Temporary Employment with Big Drawbacks