In an extraordinary move by a sitting U.S. President, Donald Trump called for a boycott of an iconic U.S. company in August when reports surfaced that Goodyear Tire had enforced its decades- long policy regarding employees wearing political attire.

President Trump, in an angry tweet, accused the company of specifically banning “MAGA” hats—red hats bearing his campaign slogan. The tweet, which read in part, “Don’t buy GOODYEAR TIRES-they announced a BAN ON MAGA HATS” also told his followers to, “get better tires for far less.” And he later suggested switching out the tires on the fleet of Secret Service vehicles.

President Trump apparently became upset after a Kansas television station reported that some employees at a Goodyear plant in Kansas were told the company had “zero tolerance” for wearing clothing with political messaging, including MAGA, “All Lives Matter” and “Blue Lives Matter.”

The television station reportedly showed a graphic of a slide it said was part of a company diversity training presentation that identified the types of political messages the company would not allow employees to wear to work.

The company said that the material shown by the news station was not distributed by the company’s corporate offices or part of a diversity training class. But company officials stressed that they do ask workers to refrain from “workplace expressions in support of political campaigning for any candidate or political party as well as similar forms advocacy that fall outside the scope of racial justice and equality issues.”

Goodyear’s headquarters are located in Akron, Ohio, and the company employs more than 63,000 people around the country. Employees are members of the United Steel Workers.

In response to the President’s tweets, the city of Akron responded by singing the praises of the more than century old company saying, “Goodyear has believed in this community for generations, investing in the power, tenacity and honest people of the heartland, which is more than we can say for this president.”

“Goodyear employs thousands of American workers, including in Ohio, where it is headquartered. To President Trump, those workers and their jobs aren’t a source of pride, just collateral damage in yet another one of his political attacks,” Biden said. ■ 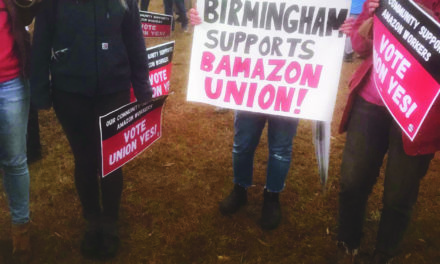