The 71st Convention of the Union Label Department was marked by inspiring accounts of successful union organizing and union militancy in the face of anti-worker, anti-union tactics used by major employers. Several resolutions important to the mission of promoting union made products and services were passed.
Jon Schleuss, President of the CWA Newspaper Guild, spoke on the campaign that resulted in the organizing of New your Times digital information workers. The company opposed the workers’ efforts despite having other unions in house. he spoke on the way that young workers could be motivated to join an organizing campaign. He advocated having strong worker committees to spread the word about union benefits.
David Woods, International Secretary-Treasurer of the Bakery, Confectionery, Tobacco and Grain Millers, described his organization’s aggressive negotiations with anti-union companies. He saluted his union’s members who struck in defense of their rights and ultimately won major gains.
Delegates to the convention voted to approve several resolutions. The resolutions called for support of union-made products and union-provided services, the Union Label Resolution. Another resolution called for including union label language in collective bargaining agreements. Consumers want and need to now how to identify what is union made.
Other resolutions call for using and submitting updated information of various sorts, including products, services, and contracts, to the newly developed Union Label database which is available to consumers and union officials online. The database can be found at UnionLabel.org.
In addition, the delegates elected the ULSTD Executive Board and approved the financial report delivered by ULSTD Secretary-Treasurer Debby Szeredy.
The Convention ended with clear determination on the part of participants to continue promoting the Union Label and to defending the interests of union members and all working people. 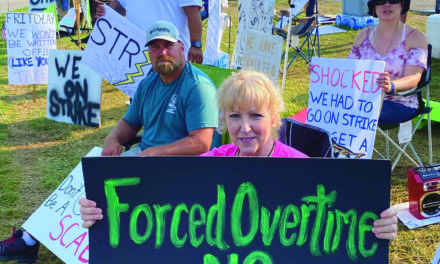