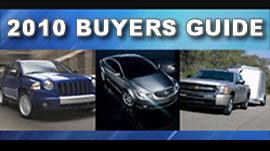 This guide is prepared by the UAW to provide information for consumers who want to purchase vehicles produced by workers who enjoy the benefits and protections of a union contract.

Because of the integration of U.S. and Canadian vehicle production, all these vehicles include significant UAW-made content and support the jobs of UAW members.

When purchasing one of these vehicles, check the Vehicle Identification Number (VIN).

To order copies of the 2010 union vehicle buying guide, contact the