It’s nice to have friends and allies and supporters. But for some it’s even nicer, if more costly, to have cronies. Cronies, not buddies, who have the political power to bestow favors on those who can fill their campaign war chests, fund their PACS and hire their spouses and family members.
What kind of favors can these cronies give? First and foremost: tax cuts that benefit the richest Americans and corporations; deregulation of safety and health, environmental and workplace standards; attacks on public education to gain more tax cuts and promote private education; and reducing financial safeguards to prevent another Great Recession or worse.
The cronies also reward their patrons with endless assaults on workers’ rights and the unions that represent them. Some cronies support rolling back such social policies as protective child labor laws. And, of course, Social Security, Medicare, Medicaid, the Affordable Care Act and other programs that benefit the majority of Americans. Obliterating or limiting these programs would enable the richest, the so-called 1%, to become even richer. Cronies aim to please their donors.
But working people don’t have cronies. We do have each other and our unions, if we are lucky enough to belong to one.
As the 2020 elections loom larger and larger, we have a chance to confront cronyism and find political leaders unattached to the oligarchs. We should evaluate all candidates closely before we adorn them with a Union Label. ■ 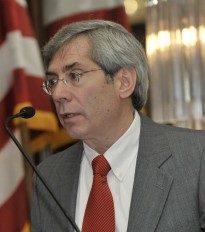