Postal Unions Battle On Capitol Hill to Save USPS

From the May/June 2012 Label Letter 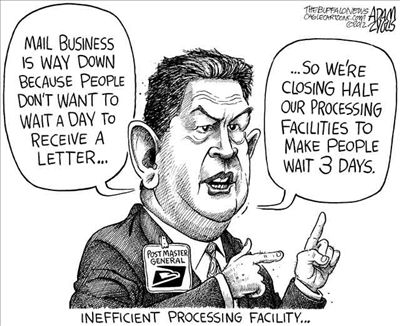 Unionized workers in the U.S. Postal Service continue their battle on Capitol Hill to save the service from a barrage of cuts that the unions charge are politically motivated and unnecessary.

The unions have secured support among a bipartisan majority in the U.S. House of Representatives for separate bills that would maintain six-day deliveries
by the Postal Service and recalculate the current formula for pre-funding retiree benefits—the latter has resulted in huge end-of-year payments by USPS and a surplus of some $50 to $75 billion to fund future retiree benefits. Freeing up that money for USPS to use in operations would enable the service to show profits from its operations, the unions maintain.

Postal unions continue to make their case for similar measures in the U.S. Senate. The effects of the recession, combined with the onerous and unusual requirement for prefunding retiree benefits has resulted in chronic cash shortages for the Postal Service despite indications that the USPS parcel delivery service is moving toward new levels of profitability. The National Association of Letter Carriers (NALC), for example, notes that profits for USPS shipping services rose 10.3% in the second quarter of 2012, to $7.3 billion.

With a combined membership of nearly 410,000 workers, NALC and its sister union, the American Postal Workers Union, represent the largest majority of USPS personnel.

The unions argue that no other enterprise in the nation faces such onerous funding requirements for retiree benefits. Furthermore, they point out, USPS has already downsized by more than 110,000 jobs since 2008.

Still, Rep. Darrell Issa (R-CA), chair of the House Government Oversight Committee, and Postal Service Subcommittee Chair Dennis Ross (R-FL) continue to push legislation that would impose radical and punishing changes on USPS, including what the unions describe as a “takeover” of the USPS along with harsh changes in Postal Service collective bargaining that would virtually scrap contractual rights for USPS workers.