After ballot measure Proposition 22 passed in California on November 3, Ross Barkan wrote in The Guardian “one of the darker outcomes of 21st-century work life has been the predatory gig economy. Divorced from healthcare benefits and regular pay, millions of workers are told they are supposed to be lucky to drive passengers around in a car for ever-diminishing returns.”

Proposition 22 was a ballot measure that codified gig economy companies to continue treating drivers as independent contractors. The measure severely limits the impact of a Assembly Bill 5, which was signed into law in California in 2019. AB 5 aimed to protect gig workers by classifying them as employees thereby affording them benefits required under federal and state labor laws. Voters passed Proposition 22 after Uber, Lyft, DoorDash and others spent more than $200 million on advertising and public relations messaging that even confused those who drive for the companies. The ballot measures’ passage on Election day hamstrings lawmakers even furtherby requiring a seven-eighths super majority to make changes to the law.

Now, labor unions and their allies fear that the vote will have a nationwide impact, and for good reason. Just days after the ballot measure passed, Uber CEO Dara Khosrowshahi told listeners on a third quarter earnings call that the gig company intends to build on its success with writing laws that undermine labor rights to its benefit. “Going forward, you’ll see us more loudly advocate for new laws like Prop 22,” she said.

DoorDash CEO Tony Xu and Lyft’s chief lobbyist Anthony Foxx also told the Washington Post of plans to build on their success in passing Prop 22. Xu said, “now we are looking ahead and across the country, ready to champion new benefits structures that are portable, proportional and flexible.”

Passage of this law watered down protections that the workforce was supposed to receive had the measure failed. There was a minimum wage protection in place. Now a watered-down version takes its place. Companies are only responsible for paying a worker’s “engaged time,” meaning when a driver, for example, is on trip with a passenger or traveling to pick up a passenger. Waiting time would not count as paid time.

Uber and Lyft make the claim that drivers can make as much as $15.60 per hour. A study by the UC Berkeley Labor Center estimated that drivers could make as little as $5.64 per hour under Prop 22 (https://laborcenter.berkeley.edu/the-uber-lyft-ballot-initiative-guarantees-only-5-64-an-hour-2/).

Also at risk are protections workers receive under federal and state labor law such as sick leave, workers’ compensation, and unemployment. Workers will also find it difficult to sue employers for wage theft.

It’s unclear how recent changes will affect other protections workers won in recent months, but former U.S. Secretary of Labor Robert Reich has said that he fears Prop 22 will “encourage other companies to reclassify their work force as independent contractors, once they do, over a century of labor protections vanishes overnight.” 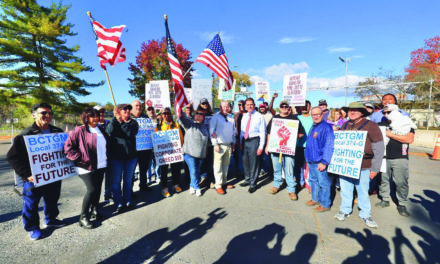