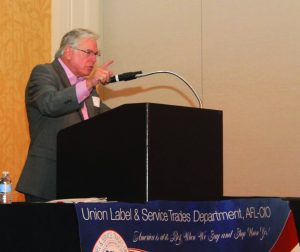 The Union Label and Service Trades Department’s 70th Convention’s message was clear to all who attended: We must use the power of the boycott and the power of solidarity to achieve improvements in workers’ lives. Speeches from Missouri AFL-CIO President Mike Louis, APWU President Mark Dimondstein, and BCTGM Secretary-Treasurer Steve Bertelli repeated that message.

The Convention, held on October 21, 2017, in St. Louis, convened with an Executive Board meeting and luncheon in the morning, where some pre-convention planning and minor business of Union Label 70th Convention Focuses on Power of Boycott, Union Solidarity the Department was discussed among attending board members. Members were reminded of their assignments to some of the Convention committees and newer members were introduced to each other.

The full Convention convened at 1pm with rousing introductory remarks from Mike Louis. Louis, as president of the Missouri AFL-CIO, is overseeing a giant effort to beat back right-to-work in the state. The state Federation turned in a petition with 310,000 signatures – three times the amount needed – to put the socalled right-to-work law on the ballot in November 2018.

“Not only did we get the signatures,” said Louis, “we got all eight (congressional) districts, everywhere across the state.”

Louis added: “We’ll decide, the citizens of Missouri, will decide whether right to work will become law in this state!” 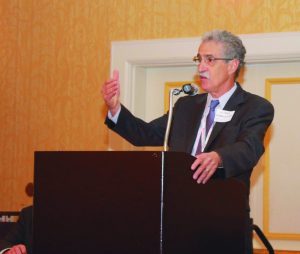 Following Louis, APWU President Mark Dimondstein presented the “Beat Back Staples” campaign’s successful efforts on behalf of postal workers and letter carriers. The Postal Service was going to place full blown post offices into Staples office supply stores across the nation and staff them with low wage Staples employees, rather than USPS employees. The APWU and NALC launched into action with a boycott of the stores and informational picketing to put a stop to the plan. The National Education Association and the American Federation of Teachers
supported the boycott, along with other unions in the AFL-CIO. On the day Staples rang the bell at the Nasdaq, a cadre of members stood outside the window of the Nasdaq with signs reading, “The US Mail is not for Sale.”

Dimondstein said someone at Nasdaq told him, “You’re going to ruin their [Staples] day.”

“We cannot be afraid to use our money to protect our jobs, our service and our standards,” said Dimondstein. “New and different ideas are even more necessary in today’s climate, but solidarity is always the way forward.”

Staples and the Postal Service backed off the plan after more than three years. “We took away three main lessons from this campaign. 1. You got to believe that workers can win. Workers can understand these issues and get involved. 2. We can’t be afraid to take it to the streets. Members must stand up and do something in their own interest. 3. We’re not alone and we can’t win alone.

“We look at this victory as your victory. Everyone stood up to the Postal Service and Staples and said enough is enough. We salute everyone who fought to defend good union jobs and public institutions, and good wages. The union makes us strong.” 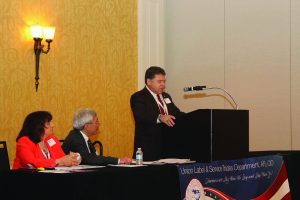 Steve Bertelli, BCTGM vice president, discussed
the Nabisco 600 campaign that BCTGM members have been participating in.

Steve Bertelli from the Bakery, Confectionery, Tobacco Workers and Grain Millers’ International Union, recounted the story of the Nabisco-Mondelez 600. Last year, Mondelez International (Nabisco’s parent company) chose to outsource some 600 jobs from its Chicago Nabisco bakery. In the same year, its CEO, Irene Rosenfeld, made $16.7 million. The workers have launched what they call the Nabisco 600 tour, taking their stories to local unions, college campuses, and congregations.

“The response has been amazing,” said Bertelli. “They get it. At college campuses, a lot of the students have had fathers, mothers and grandparents lose their jobs to NAFTA. It was a message well received.”

“You don’t get into these fights thinking it’s not for the long haul,” added Bertelli. “We’ve gotten support from Congressional leaders, with 18 reaching out to the corporation about this issue.”

Reps. Nancy Pelosi and John Lewis fully committed to help, said Bertelli, and told the union to “think big.” When taking their story to congregations, the workers are railing against the immorality of harmful worker policies and the effects of the Nabisco model on working families.

“We’ve got the full support of the labor movement,” said Bertelli. “And we’re starting to see the window open.” Bertelli noted that Rosenfeld is resigning effective Nov. 1, and that she was “shown the door.”

“We’re certain her replacement doesn’t want to deal with this,” added Bertelli. “Solidarity! That’s what we’ve asked for and you have delivered,” finished Bertelli. 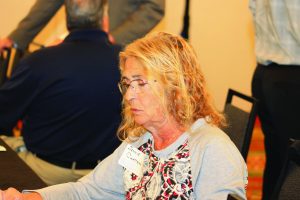 Kline referred to the growing trend of state and federal legislatures considering, and in some case passing, laws disallowing the right to boycott, conduct street demonstrations and protest. These bills and laws vary in numerous respects, but they share a common goal of scaring people away from participating in boycotts meant to protest Israeli government policies. Such laws could be dangerous models for anti-union measures.

“They are wrong,” said Kline. “It is the proverbial slippery slope. If one boycott can be restricted to satisfy the demand of an interest group, another interest group can demand satisfaction too. What would have happened in South Africa had the right to boycott been restricted?”

“We must be vigilant in the defense of our right to lawfully protest, to dissent and to influence policy, corporate and governmental,” finished Kline. A financial report from ULSTD Secretary-Treasurer Debbie Szeredy followed Kline’s remarks.

The ULSTD’s new “app” was introduced to Convention Delegates at the end of the Convention. The app, available on both Android and Apple devices, is the go-to source for union products and services that have been uploaded into the Union Label Department’s database. The goal is for union members and conscientious shoppers to use the database to shop for products produced in a factory or shop where fair wages and workplace rights are protected under a union contract. There was also a resolution calling for local unions and union members to upload their products and services into the app’s database using the “add a product feature.” 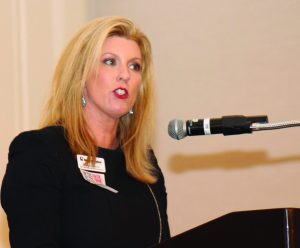 Bridget Martin, Bank of Labor (BOL), talked
about the solidarity her bank has shown over the years, including how they divested from Staples during the APWU’s Boycott

Bridget Martin made a presentation to Convention delegates on behalf of the Bank of Labor.

“We’re about creating customized solutions to difficult situations,” said Martin, when discussing how the Bank of Labor helps local and international unions. “We make sure that we’re investing responsibly, and investing in products that serve working families.”

The Convention adjourned in the early afternoon.

I Am a Federal Employee